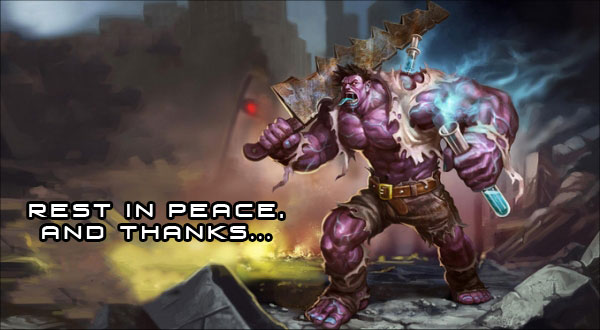 In this touching tribute from Trevorghost on this LoL sub-Reddit, I was reminded that League of Legends, though a game I am passionate about, is just a game.  But at the same time it is so much more than a game.  It is a community of human beings, all of whom play the game for their own, sometimes very personal, reasons.  In the tribute, Trevorghost tells us of his time taking a novice player, Nachovy, under his wing to try to teach him the game, but eventually giving up on him and avoiding future invites to play.  What he discovers later breaks his heart:

Today, I was scrolling through my FaceBook when I noticed a long post from his account, which was odd because he had always had so few words when we played. My heart sunk, it was his mom, my duo queue friend had passed away, he had an aneurysm caused by a brain tumor.

I talked to his mom on FaceBook, expressed my condolences. I never knew him in real life but it was still a bit upsetting. What really made it heartbreaking was her telling me how much he loved his games, and that even in his final days he was always trying to play something with his friend, be them the real life or online variety.

I guess, when the reality of brain tumors set in on him, he responded by hurling a Mundo cleaver at them in lane. And when the unfair prejudices and burdens of this life took their toll, the games he played didn’t.

We all tend to judge people based on their skill alone. If we lose a game we look to the person who stood out as just a little bit worse than the rest of the team and start blaming him for destroying our chances of becoming some pro player or Gold player or what have you.

If that last paragraph sounds like you, please take the time to read the rest of this heartbreaking story, and Trevorghost’s on-the-mark advice about a life-lesson learned HERE.